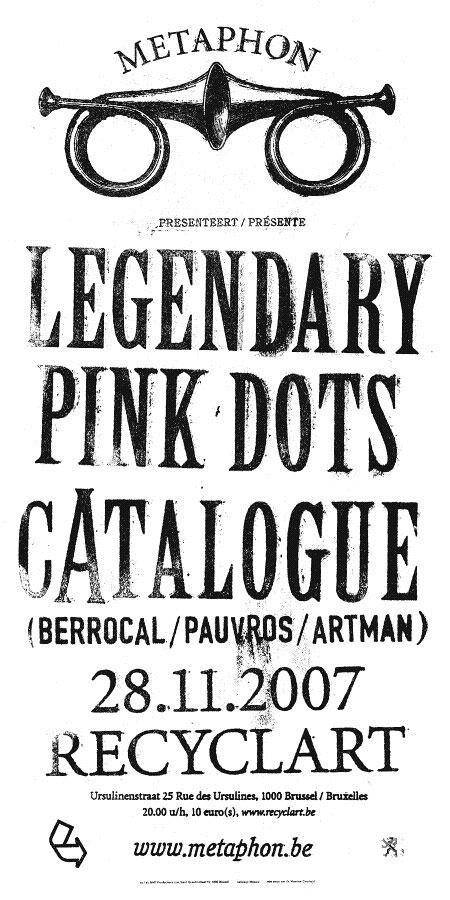 Founded in 1980, the Legendary Pink Dots occupy an important and individual place in the field of experimental and psychedelic music. The band is fronted by singer, lyric writer Edward Ka-Spel and keyboardist Phil Knight alias The Silverman with Niels Van Hoorn (Saxophone), Martijn de Kleer (Guitar) and Raymond Steeg (Sound) forming the current line-up of the band. Their sound is often made up of a complex conglomerate of electronics, saxophones, guitars, drums and Ka-Spel’s distinctive voice and unique lyrical invention.

What a long strange trip it has been… It was back in August 1980 that The Legendary Pink Dots was born in a crumbling squatted house in East London. Expectations were not an issue back then as the passion was all-consuming – this was something that simply HAD to last. Indeed it would seems that The Dots have hardly paused for a breath since those quizzical yet confident candlelit sessions. For sure, band members came and went ,especially in those early days, for such an intensity is not for everyone- yet founder members Edward Ka-Spel and Phil Knight (The Silverman) are still there, mad as ever, far too lost in the music to wonder where the next meal is coming from. 25 years and such is the musical ambition of The Dots that the occasion almost slipped by unnoticed.
However the acknowledgement of this landmark means that the band now has to present something worthy of such a lengthy endeavour..

Catalogue is a French music collective formed in the late 70’s by Jacques Berrocal; trumpetist, vocalist and one of a kind performer of the French underground scene. Berrocal started his career in the early 70’s. His music crosses many genres like free-jazz, rock’n’roll, sound poetry and concrete music. This original and unusual mixture was also the perfect soil for a collaboration with Nurse with Wound in the early 80’s. In Catalogue Berrocal is joined by Jean Francois Pauvros; one of the first French guitarists to develop a free and intuitive style that goes across any category. Pauvros has been working with ao. Arto Lindsay, Keiji Haino, Peter Kowald, Joe McPhee and even got proposed by La Monte Young to participate on one of his projects. The meeting of Berrocal and Pauvros was determinating for the cristallisation of Catalogue. They both shared an anarchic vision which was the blueprint for the groups uncompromising existence. Catalogue’s first LP “Live in Antwerpen 1978” included several other ‘occasional’ musicians but the real formation came into existence when drummer Gilbert Artman (of Lard Free fame and mastermind behind Urban Sax) joined in. With this trio Catalogue brought some highly controversial, proposterous and incandescent work; live and on record (cfr.’Penetration’ 2LP released by the Suisse label Hat Hut in 1982). Due to this reputation the group didn’t fit in any category and thus remained fairly obscure and underestimated till today. Their performance on november 28 will take place with the legendary Berrocal, Pauvros, Artman line-up and it’s their first live appearance in about 20 years … an exceptional occasion…