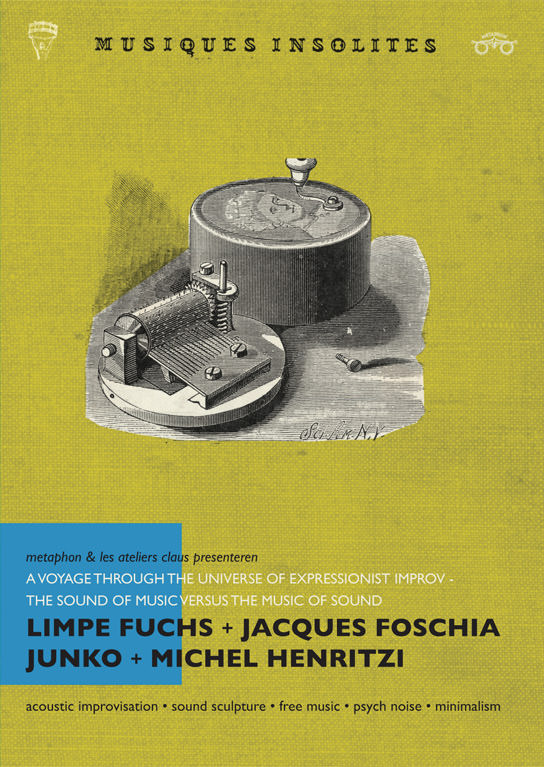 Limpe Fuchs is an internationally well respected artist/improviser/composer of acoustic and visual happenings. In the early 60’s she studied piano and violin and started ‘Anima Sound’ with her then partner, sculptor Paul Fuchs with whom she invented a variety of self made percussion, wind and string instruments. Since then, mainly using her percussion set and her unearthly voice, she quickly developed a very personal sound and style free from all rules and trends often being even too far out for her contemporaries of the krautrock and free jazz scene. Now, at the age of 70, she effortlessly maintains this level, loyal to her roots, simply because her life, her music, her vision are all one : spontaneous and natural focused purity. Her performances are exactly in the same spirit and therefor of rare beauty.

Junko got mostly know through her participation in the infamous japanese brutal noise-rock outfit Hijokaidan formed in the late 70’s by Jojo Hiroshige who also runs the label Alchemy Records. Junkos overexposed diaphanous body, her scream stands miles away from the hysteria of other yellers in the noise music landscape. It is just terror, or call it beauty. She almost appears disconnected from herself, as if her voice were detached from her body, each evolving in a separate space. Her scream recalls the phrasing of free music saxophonists, a common musical naivety devoid of academicism and technique. Besides the ongoing Hijokaidan project she manifests her aesthetic in collaborations with a.o. Masayoshi Urabe, Atsushi Tsuyama (Acid Mothers) and Michel Henritzi.

Michel Henritzi (1959) is a French multi instrumentalist who has been around since the early 80’s in the French industrial music scene, being part of Nox and later on the avant noise project the Dustbreeders. Last decade he mainly focused on string instruments (guitar, lapsteel, banjo) and his sound ranges from abstract blues to noise. Besides the music Henritzi has been writing for the French magazine Revue & Corrigé and got specialised in the Japanese noise/improv scene. He worked with many different, mainly japanese artists a.o. Masayoshi Urabe, Rinji Fukuoka, Tetuzi Akiyama, Junko, Bruce Russell (Dead C). Since 2000 he runs the label A Bruit Secret mainly focusing on releasing japanese improvised noise music.

A Metaphon co-production with Les Ateliers Claus, bringing together their forces to organise a series of unusual and exclusive contemporary music events on a sunday afternoon: ‘Musiques Insolites’ #8