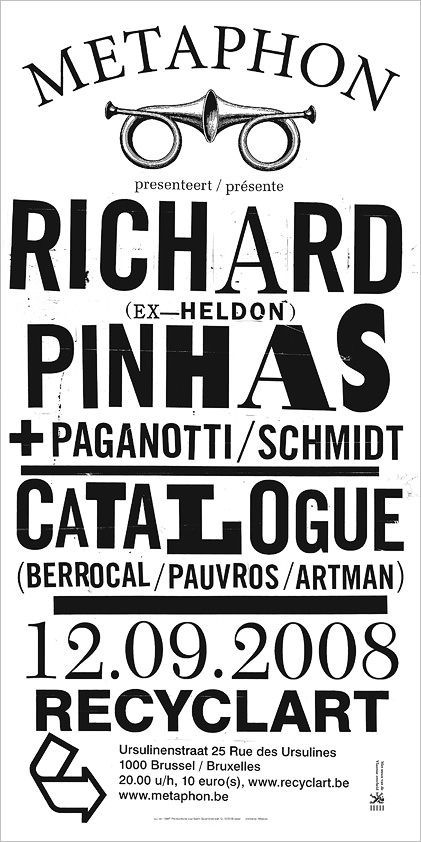 Richard Pinhas is recognized as one of France’s major experimental musicians and is widely considered as a key figure of French electronic music as his German counterparts Ash Ra Tempel, Tangerine Dream, Cluster or Kraftwerk.
Ceaselessly innovative in a career spanning more than 30 years and mastermind behind the psychedelic/electronic band Heldon formed in 1974, Pinhas is also a world-class guitarist whose diabolic guitar work definitely earns comparisons with Robert Fripp. Later on Pinhas has also flavored his music with a degree of seething drama and raw intensity that elevates it to another level; muscular jamming, manic drumming and juggernaut noise riffs that could be considered as an early prototype of industrial music or electronic punk (eg. the album ‘Un Rêve sans Conséquence speciale’ from 1976).
The music of Pinhas also incorporates deeper levels, as he integrates his passion for science fiction and his background in philosophy (Ph.D. from Sorbonne, student and friend of Gilles Deleuze) to create a musical landscape that is deeply mysterious and utterly beautiful. Pinhas has a discography of approximately 20 albums, solo and as Heldon, most of them are reissued by Cuneiform Records. His work is highly respected amongst the younger noise generation resulting in collaborations with a.o. Merzbow, Scanner and Wolf Eyes…
Current live performances fuse electronic music with guitar, drums, samples, and visuals/video projections. The line up will include Richard Pinhas on guitar & loops, Antoine Paganotti (of Magma fame, as his father Bernard) on drums, and Jérôme Schmidt on computers & samples.

First ever Pinhas performance in Belgium!

After a very succesfull performance last year missed by too many Catalogue strikes again…
Catalogue is a French music collective formed in the late 70’s by Jacques Berrocal; trumpetist, vocalist and one of a kind performer of the French underground scene. Berrocal started his career in the early 70’s. His music crosses many genres like free-jazz, rock’n’roll, sound poetry and concrete music. This original and unusual mixture was also the perfect soil for a collaboration with Nurse with Wound in the early 80’s. In Catalogue Berrocal is joined by Jean Francois Pauvros; one of the first French guitarists to develop a free and intuitive style that goes across any category. Pauvros has been working with ao. Arto Lindsay, Keiji Haino, Peter Kowald, Joe McPhee and even got proposed by La Monte Young to participate on one of his projects. The meeting of Berrocal and Pauvros was determinating for the cristallisation of Catalogue. They both shared an anarchic vision which was the blueprint for the groups uncompromising existence. Catalogue’s first LP “Live in Antwerpen 1978” included several other ‘occasional’ musicians but the real formation came into existence when drummer Gilbert Artman (of Lard Free fame and mastermind behind Urban Sax) joined in. With this trio Catalogue brought some highly controversial, proposterous and incandescent work; live and on record (cfr.’Penetration’ 2LP released by the Suisse label Hat Hut in 1982). Due to this reputation the group didn’t fit in any category and thus remained fairly obscure and underestimated till today. As last year their performance will take place with the legendary Berrocal, Pauvros, Artman line-up … again an exceptional occasion…